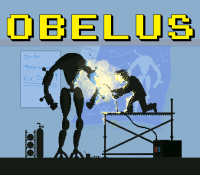 An arcade boss rush game I made in a team of four in ten weeks during university. It was made as an arcade game so we made an arcade cabinet to go with it.

We tried to make it resemble a classic arcade game as closely as we could and we wanted to take our time with designing the bosses, so everything in each fight was designed and developed separately. The player had lives and a score, and shooting was 8-directional. Besides that there was a highscore list with three-character entries and an animated intro explaining the premise of the game.

The game is inspired by the story of David and Goliath, where the player takes control of a small android that fights gigantic robots.

All three bosses are unique, as was their arena. Most of the terrain was destructible and the player could collect three weapons in each level: a rocket launcher, a scattergun and a minigun. Two of the three bosses had more than one phase as well.

In contrast to most projects I did, this one was a unique combination of tedious and rewarding. Every detail was implemented for one thing, and finally getting it right made the game feel a thousand times better every time.

The development highlights for me were:

The biggest things I learned from all that are: