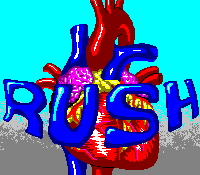 An arcade platformer made during the Global Game Jam 2013. In the game you have to do dangerous things like jumping over rooftops in order to keep your adrenaline levels up for as long as possible.

It was the first game jam I participated in. I took the train to the HKU jam site in Hilversum together with a friend. The theme of the jam was:

🔊 The Sound of a Heartbeat ♥

Going in blind we had no idea what to expect. We were both capable of coding but not knowing what other skills would be there, we chose to put ‘Designer’ on our badges and we formed a team with two programmers.

The theme made me think of the movie ‘Crank‘, in which the main character must keep his adrenaline flowing to prevent him from dying. And so, the game concept was decided in the first half hour.

During the jam, I:

My main takeaways from my first game jam were: