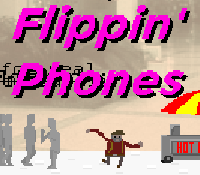 A single player arcade game for PC where you save the world by slapping phones out of people’s hands.
Made during the game jam of the Indie Gameleon 2014.

We noticed how the people in the work don’t seem to acknowledge each other, which reminded us of the the growing smartphone usage and how people could often prioritize their phone over the people they were with.

Flippin’ Phones was meant to be a not-too-serious jab at that so as my role as programmer, I had to convey that intented silliness. My focus was:

We released a polished version on Itch.io in June, 2014. The game (and its sequel “Super Flippin’ Phones“) was also picked up by some of the largest streamers at the time like DanTDM, TotalBiscuit, and PewDiePie.