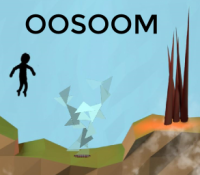 ‘Out of Sight, Out of Mind’ is a puzzle platformer made during the Global Game Jam 2014. We won first prize of the Leeuwarden location and were nominated for the ‘Kleine Uil 2014’.

We don’t see things as they are, we see them as we are 👀

In the game, elements don’t exist if you don’t perceive them. Closing your eyes would make the ground disappear if you’re not standing on it, and large ticking boulders would stop moving when covering your ears. Covering your eyes would actually prevent you from seeing anything except the things you’re feeling or hearing.

I took the role of designer and programmer and it was the first game I made using GameMaker’s built-in physics system. I coded the gameplay, effects and implemented everything my team members created; sprites, sliced 3D environments and layered music.

My biggest learning points of this project were: