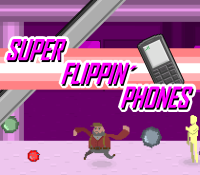 A single player arcade game where you save the world by slapping phones out of people’s hands. It was released for PC on Steam and Itch in February 2016, and in January 2016 for Android. It was nominated for the Indie Prize 2015.

Get on Steam
Get on Itch.io

Super Flippin’ Phones is my first commercial project and a more polished version of the game jam game Flippin’ Phones. The game jam game was picked up by multiple streamers and got over 60.000 downloads on Gamejolt, so we decided to work towards a commercial release to get experience developing a game from A to Z. As a nod to our retro nostalgia, we added ‘Super’ to the title of this ‘sequel’.

As the programmer of the team, my responsibilities included:

I also had to take the UI and performance into account of the Android version, prototyping and experimenting with aspects like swiping menu elements and moving by rotating the smartphone.

It was a great experience to fully develop and release a game. Some things went better than others, though: