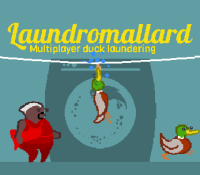 A 2-8 player party game where players work in a laundromat that washes ducks. Players need to pick up ducks and throw them in a tub and hang them on a clothes line to dry before they start to eat your entire stack of money.

Laundromallard was made during the Global Game Jam 2017. At our location in Groningen, we won First Prize and the award for Best Audio. The theme was:

In a team of three, my main role was programming. The other roles were audio and art and everyone did design on the go with a scope and design we had all agreed on. One of my teammates demanded we’d incorporate ducks into the game, to which no one objected. This joined together with the jam’s theme into ‘what if you make waves in the tub where you wash your ducks?’

For this jam, my requirements were:

Having decided on the design, I was mainly focused on: