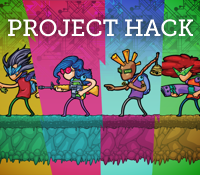 A random generated 4-player co-op platformer where reality is getting hacked and players have to travel to every continent to revert catastrophic events.

The name, Project Hack, was a working title and the game was a new attempt at developing my co-op platformer A Hackers’ Hunt. This time, an artist was eager to join the team and we had a lot of fun exploring and developing the look and feel of all the biomes, upgrades and other mechanics.

Some of the bigger changes compared to A Hackers’ Hunt were:

Thinking of the co-op aspects, we experimented with the death state of a player. Losing all your health would mean turning into a sock puppet that emerges from the backpack of another player. Defeated enemies would drop pickups that the sock puppet could eat to eventually regenerate back into a character.

Some time into the project, I felt like I started losing grip on the scope and goals of the game. We decided to try to save on workload by making generic enemy parts that I would use to procedurally create enemies, which in the end made the game feel more generic and not like the way we wanted to go.

Just like its predecessor, A Hackers’ Hunt, we decided to shelf Project Hack as well. Multiple factors played a part in this, but the reasons that stuck with me the most were my inexperience with Lead Design and scoping, and the lack of any funding for anyone, making this more of a passion project. Because of all the uncertainty, we agreed we shouldn’t continue anymore. Besides disappointment, it also gave me a sense of relief, as I felt like I had dragged everyone into my design for too long now.

I still love the idea of the couch co-op gameplay, but there are a lot of things that I would do different now:

I’m still very proud of what we made. The improvements I made on a technical, art,game feel, and collaborative level are gigantic.