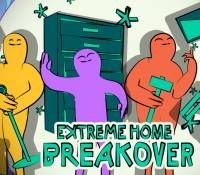 Extreme Home Breakover is a co-op game where players have to unload a moving truck within a set time. Players are only able to throw the furniture so they have to minimize the damage.

The game was made during the Global Game Jam 2019 by a team of five people. The theme of the jam was:

What home means to you

We had some trouble thinking of a game concept. We tried to interpret the theme in different ways but ended up with designs that we found too complex or concepts that just didn’t sound fun to us. We didn’t want to take the theme too literal by using a home, but we did it anyway after we decided we’d rather make something wacky and energetic than do an original intepretation of the theme.

My main task as designer/programmer was the character controller. I wanted to make the interaction feel wacky so instead of the character having a pick up animation, I chose to make it as clear and ‘gamey’ as possible by just having the piece of furniture float above the character’s head. I also added more little effects to enhance the game feel.

The game also featured a high score board with a team’s final score, a polaroid ‘picture’ of the result of the house, and the (random generated) team name.