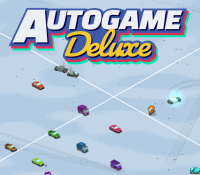 Evade traffic on a intersection in a car using a single button to win super fast rounds while painting the road with your antics!

Autogame Deluxe is a personal project that has taught me a lot about the way I make games. It’s been in the making on and off for about eight years while I never made it clear for myself what the final game should look like. The core hasn’t even changed that much during this time; the gameplay loop has been solid from the start and it’s even ready for events with large, custom buttons.

From the beginning, I knew Autogame Deluxe should be:

Because there was no pressure on this project, the game has gone through many phases. Autogame Deluxe started as a microgame and has been rebuilt (at least) three times where things like control schemes, items and a tournament mode have been implemented, and removed.

Looking back, my biggest challenges were:Maintaining the feel of the game, adding elements that fit the theme while being recognizable.Polishing the UX to make sure scoring and ranks are clear, even for first time players.Deciding when to stop changing things!

For this final iteration, where I finally decided on a content lock, there are still a couple of things I want to add because I value the experience. These are:

One thought on “Autogame Deluxe”