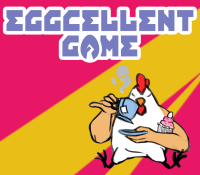 Eggcellent game was made during the Global Game Jam 2022. The game got voted 1st for technical complexity.

The goal of the game was to press glowing buttons before your opponents could reach them. We didn’t manage to close the gameplay loop, but we had a lot of fun developing and playing. The theme was:

For the team it was secondary though, as we felt making something we wanted to make was more important. So, the original concept was an online multiplayer game in which chickens with human arms could hold hands. By holding hands, you could throw each other up high ledges to reach the goals.

We quickly ran into technical difficulties, as the holding hands part was a big task (with networked Inverse Kinematics) on which the entire concept leaned. Nearing the end of the jam we decided to scratch the hand holding mechanic and went with chickens launching themselves through the level.

My main job was designing the gameplay as well as the simpler programming parts. Because of the pandemic, it was very nice to be able to mess around in a team like this again. So the biggest things for me were:

I believe people thought our game was technically complex because it had smooth multiplayer, even though we had to cut the core mechanic of our original concept.